HITTING THE MAT: The Making of A State Champ or At Least A Good Man! (Blog 10)

My son Dakota has improved in wrestling during this preseason beyond my expectations. And another jam-packed weekend consisting of early mornings and late nights just ended. Unfortunately, I didn’t really get a chance to work with my son, Dakota on his wrestling moves.

However, at least once a day as we passed each other, Dakota gave me a hug that usually resulted also in him bear hugging me followed by a little play wrestling for a few seconds. I hit him with a nice lift during one of these moments. And then I showed him how to do it.

Also, I have noticed recently that some of my wrestling moves don’t work so easily anymore on Dakota. But, I guess this is good because it means he’s getting better, and not that I’m necessarily getting worse. In addition, it also means that I now get a chance to show my son Dakota sequential or chain-wrestling.

For example, Sunday night Dakota underhooked me while we were passing each other in the kitchen. I hipped in to load him up on my hip for a simulated throw. However, he backed out not allowing me to load him up. But then I came right back with an opposite direction underarm spin where I did load him up for a throw. But, I then stopped halfway through the move with his feet just off the ground to explain to him how I did it. And because he is athletic, he might actually be able to surprise a few people by hitting this second-move underarm spin on them. My wife gets some credit here too though for not yelling at us this time to not break anything in the kitchen.

In addition, there is another benefit here as well. Going through this sequence with Dakota made me feel a little athletic again. It even made me feel wise, well at least in the ways of the wrestling world anyway. And to top it off, I must admit, I felt valuable again in the wrestling world because I’m still able to hit and then teach this more advanced move. Furthermore, I think I felt this way because I still have some experience and knowledge that my son Dakota doesn’t have yet even though he is being taught by one of the best out there, Coach John Knapp of KT KIDZ Wrestling in Rocky Hill,

Well, once again, Monday night gets here quick. I get home as fast as I can from work only to find Dakota in bed sick, however. And Wednesday night there won’t be any wrestling practice because of Halloween. So, I guess Dakota will not have any wrestling practices this week. I’m slightly disappointed because he is sick, and he won’t be able to prepare himself this week for the upcoming season.

However, I’ve also been around long enough to know that this is all part of life. It’s just how things go sometimes. Furthermore, I was up late last night with my daughter, Dakota’s sister, because she had a 104-degree temperature. So, I guess it only makes sense that Dakota would be sick, too, eventually.

Although, something good does come out of this though… As soon as I leave Dakota’s bedroom, I bump into my two youngest daughters waiting for me in the hallway wearing their soccer practice uniforms. And you can probably guess what happened next. Yup! You got it! They asked me to go with them and their mom to soccer practice since I wasn’t bringing Dakota to wrestling. I guess there really is a silver lining in every cloud, huh?

Watching my two youngest daughters were fun. It was a little cold sitting outside under the lights, though. At least wrestling is inside where it’s usually warm. But, regardless, watching my daughters play soccer was worth it. And when I finally got back home, Dakota was awake and in the kitchen. He asked me if I’d drill wrestling moves with him. But, I declined. And then I told him to go back to bed, and we’ll see how he feels tomorrow night.

He gave me a very disappointed look that broke my heart a little. But, I’m not in this fathering business to take the easy way out. Instead, I’m doing what’s right. And I’m doing what’s right even when I don’t’ feel like doing it, and especially when it’s hard to do because that’s usually when it’s most important to do what’s right. And the right thing here was for Dakota to go back to be and get well, regardless of how his young machismo and love for the sport of wrestling was protesting.

Over the next few days, Dakota and I play wrestle a few more times. He grabs me in the kitchen again and attempts to load me up on his hip. I hop over and load him up on my hip instead. However, when I was jumping over, my heal accidentally banged the pantry door. So, as I’m loading Dakota up on my hip telling him how I got him this time, my wife is yelling at me not break anything in the kitchen. A few more similar play wrestling situations occur over the next couple of days. And we’re back to having some fun as only two wrestlers can; even if one of them is a bit old and a bit broken. 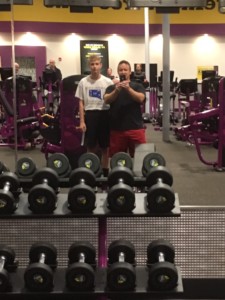 Dakota looks like he is feeling better. We’re both anxiously waiting for Monday night’s practice. Time is ticking. We only have a few more practices before Thanksgiving. And everyone knows what happens on the Monday after Thanksgiving. Wrestling season starts!

What? Wait! Hold the presses! I said, “Hold the presses!” Wow! There really is a silver lining in every cloud, isn’t there? We just had an unexpected development over here. My gym suddenly closed and it forced me to go to a gym in the next town over in Willimantic. Once there they told me I could bring a free guest with me as long as the guest was at least 14- years old.

Dakota is 14-years old. So, this weekend I found some time to bring Dakota to the gym. I have been wondering for about 20-years what the first day of my son and I in the gym together would look like. Now I know. Maybe we didn’t have any wrestling this week. But we did get in our first father-son weight lifting workout. Now we’re even more ready for Monday night’s wrestling practice! And even more ready to continue our journey together of building a good man.