Monday, Dakota and I drive to practice together due to it being vacation week from school. I finally got there on time because I didn’t have to do the hour drive to get there from work first. On the way to practice, Dakota shared with me again how bad he wants to be fixed and back on the mat again. I totally understood what he was talking about because I wished I was fixed too from all my injuries and back on the mat again wrestling at full speed. Times seemed so much simpler back then when all I really worried about was staying in shape and just wrestling.

Later on the ride there, I shared with Dakota, injured or not, that he has to be engaged at practice. He has to walk around the mat coaching his teammates and contributing to the team’s success. He said that was frustrating too because he keeps telling the new kids the same things over and over again like, “Get in a better stance,” we both say in unison. Then we both sprout off with, “Get your head up! Don’t reach! Short arms!” I share Dakota’s moment of frustration and tell him how that’s what I’m doing too, and that we have to tell someone 150 times before they finally get it. So, I guess we’ll just keep telling them.

The practice went pretty well. We had twelve out of our twenty kids there today at the beginning of our school vacation week. By today’s standards, the numbers weren’t too bad. And due to the very workable numbers of just twelve kids spread among three coaches and Dakota, our player-coach, we were able to give the wrestlers a lot of individual attention today. Our 126-pounder is slowly turning the corner lately in regards to maturity and development. He has been wrestling well lately. I spent some time today showing him some things that would add to what’s he’s already doing, and he picked up on it pretty fast. He had a great practice today. He should do well next weekend at the RHAM Duals.

Overall, it was a good practice and fun, too. Since I got there on time today, I was able to participate in the team warmup. During the warmups, I even hit a cartwheel and round-off during the line drills with only some minor discomfort in my shoulders. I’m feeling good and even a little younger after these acrobatics.

Dakota looked pretty engaged today, too, through sharing what he knows with the newer wrestlers. Due to it being vacation week, at the end of practice, Coach Torres had the wrestlers do some pretty fun running and yelling drill like a warrior. This activity really worked on their air and lung capacity. All in all, I’d say it was a pretty good practice for the wrestlers that were there.

Tuesday, Christmas Eve, we moved practice up to a morning practice in consideration of team parents and their family plans. Unfortunately, Coach Torres couldn’t make that earlier time slot because of work. Coach Rogers and I ran practice for the mere six wrestlers that showed up today, which didn’t really surprise me. Coach Rogers and I looked at each other and talked about how we still remember how we had three to four deep in every weight class when we wrestled. And some college kids would come back over the holidays to wrestle, too. It was common to see 50 kids in our old wrestling rooms during those times over Christmas break.

Well, as Coach Torres said on the bus last Saturday, “We’ll go with what we have.” The bright side is that each of these six kids will learn something today. However, practice seems a little weird without Dakota. He is across the street at physical therapy. He will come over for the second half of practice and help out with some coaching.

Practice went pretty well, and as I figured, each of our six kids did indeed learn something today. What we didn’t figure on, though, was that each one of our kids getting banged up some today. However, they still somehow managed to make it to the end of practice, and have some fun, too. Even though we don’t like it, being banged up is just part of wrestling. I even re-pulled a hamstring that has been bugging me on and off…

About two-thirds of the way through practice, I looked up at the clock and was surprised that Dakota wasn’t there yet. I wondered if he was having an extra-long physical therapy session because his knee has been acting up again…          and come to think of it, so has mine… Practice continued, and at the end of conditioning, we needed another body for Monkey Rolls, so I jumped in. I didn’t know how I was going to do, but what I did know was that the team needed me. So, I was going to do it, regardless. One of our wrestling manager girls blew the whistle, and Monkey Rolls began. Surprisingly, I hung in there with our youthful wrestlers just fine, and we ended practice on a good note. However, I was still wondering what happened to Dakota… 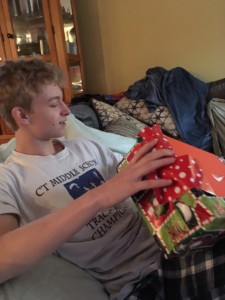 While changing after practice, I checked my phone and found out that Dakota had been locked out of the school building and had been standing outside for a while. He texted both Coach Rogers and me to come let him in, but neither of us had our phone on us during practice. We both felt terrible knowing that Dakota was here but couldn’t get in because the doors were locked, and no other person in our building noticed him out there. We didn’t have to lock our doors for added security measures when I was a young wrestler. I guess this is another issue with modern times. Poor Dakota… Life isn’t always easy, and it often doesn’t look the way we envision it… or the way we think it should be.

Well, Christmas comes and goes, and so does a couple more days of practice with about a dozen kids at each practice. Dakota, his teammates, and his coaches are still frustrated going into Saturday’s team duals tournament that he still isn’t wrestling. Maybe Dakota needs to do more physical therapy on his own, or perhaps he just needs more time to heal. After all, his doctor did say it would be a four-month recovery, which leads him up to the end of January or maybe even the beginning of February. 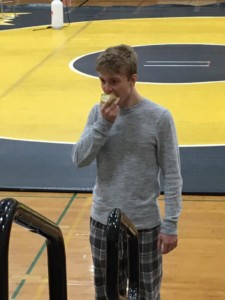 Also, even though Dakota is not wrestling at this Saturday tournament, we check his weight wondering where he’s at since he hasn’t been able to do any workouts and it’s the holidays. Dang… he’s ten pounds over again… I look him in the eye and say, “Dude, you got to start bringing your weight down.”

The team tournament at RHAM in Hebron was another great wrestling tournament. However, it was a different experience for both Dakota and me this year. For Dakota, he was more of a spectator than a wrestler. For me, last year, I was a parent, not a coach. And at one point during the tournament last year, me and Dakota’s mom snuck out and got a great sandwich down the road at a nice little sandwich shop. No sneaking out this year as a coach, though. I have a job to do! And I, Coach Torres, and Coach Rogers have a pretty big job to do today since a lot of our team is missing. We have seven wrestlers today. And we’re giving up seven forfeits going into each match. That means that if all seven of our wrestlers pinned their kids, then we would at best earn a tie. It’s going to be a winless day, no matter what we do. But the battle must go on!

Our match against my old high school went good and bad, just like the three matches that followed. Because of all the forfeits we gave up today, we technically lost all four matches. The good thing is that in head-up matches, we actually won a lot more matches today against every team we wrestled than we lost. I kept joking with Coach Torres and Coach Rogers that we were both 0-4 and 4-0 today. I thought our kids wrestled really well, and I’m proud of all of them. They’re moving closer toward becoming good young men.

Dakota did a nice job today by being engaged and offering coaching advice to his teammates. I also go to hang out a bit with my old friend and teammate, Todd Albert, from East Hartford. Todd shared an old digital picture he had on his phone of our old 1988 senior year wrestling team where I, Todd Albert, and Scott Buffington are tri-captains of the team. We are in the front row, center. Coach Torres commented that we all looked buffed and tough when he saw the picture. I mentioned that we all looked so young.

I think we all enjoyed the bus ride back home to our own school. The coaches were trading stories and laughing, and so were the wrestlers and the wrestling managers. The bus ride is a great place to build team spirit and unity by building stronger relationships. When the bus finally arrived back at school, my wife was waiting to pick Dakota and me up. Unfortunately, lately, I’ve been having a lot of car trouble. And my wife Jenn has been really stepping up and bringing Dakota and me back and forth to wrestling when needed. It really does take a village to raise a kid and perhaps help a father, too. And it also really does take a village to raise a wrestler and possibly help a coach, too… even if it is just car-pooling… 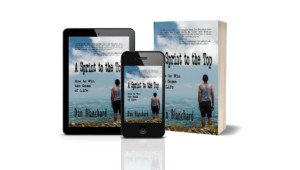