HITTING THE MAT: The Making of A State Champ or At Least A Good Man! (Blog 1)

When my wife had told me all those years ago that she was pregnant again, I was once again in the middle of a very busy wrestling season. As a matter of fact, back then it seemed like I was always in the middle of another busy wrestling season because I had been coaching wrestling year-round. I also used to coach football, too, but a few years earlier I gave up football when my first daughter was born so I would have some time to be a father to her.

However, life has a way though of throwing curve balls and change-ups at us. So, here I am now 14-years later, and my 14-year-old son, without any encouragement from me because I wanted him to live his own life, has now decided out of the blue this summer right before he enters high school that he now wants to try wrestling. He has never wrestled a single day leading up to this decision of his to begin wrestling. I’m a bit surprised, but happy as all heck because I know wrestling will make a better man out of him. But, as his father, and protector, I’m also worried because I don’t want him to get beat up or hurt.

Let me take a moment to give you some backstory. I have had a great career as an athlete where I was a two-time state champion wrestler, and twice a junior Olympian. I also had a great run as a coach where I coached a plethora of State Champs, some All-Americans, and even one National Champion. During those 14- years of coaching, I coached at all levels and was twice the Junior Olympian Coach as well. 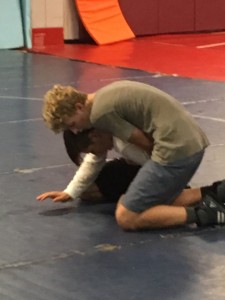 Now as a 48-year-old man, who has been living a post-wrestling life, I have put on some middle-age weight. I can no longer wrestle like I used to. I can’t run or lift weights as I used to either. I’ve had a total hip replacement, a shoulder surgery, and a torn bicep. Also, I still need surgery on my other shoulder, too. Sometimes I feel like wrestling broke a few parts on me, and I can’t help but wonder if my son should wrestle or not…

Upon further reflection, I realize that I have no regrets, and would do it all over again if I had the chance. The hardships of wrestling build character, and it helped mold me into a good man who was surrounded by other good men who didn’t allow me to take the easy way out or make excuses.

Now as a father who is raising a son of his own, isn’t raising my son to be a good man one of my most important jobs? If I can pull it off, then my son will have a better chance of someday raising his own son to be a good man who is a man of character who understands sacrifice and hard work. And who knows how far down the line this chain reaction can go from one good man raising another good man… who raises another…. And another… And another…

And when considering all of this wrestling and raising good men, I thank God that perhaps I can start this chain reaction of good men with some help from the world’s oldest and toughest sport… wrestling!