HITTING THE MAT: The Making of A State Champ or At Least A Good Man! (Blog 13)

Tonight I took my time eating dinner. It’s my son, Dakota’s last night of preseason wrestling practice with Coach Knapp and Coach West at the KT KIDZ Wrestling Program in Rocky Hill, CT. It’s been one heck of a preseason where Dakota has had a huge uphill battle to face every time we have gone to wrestling because he’s still brand new, and everyone there has way more experience than him. However, he has exceeded my expectations and done very well. I’m pleased with the effort and time we have both put into this first leg of our journey to prepare him for his first official high school season of wrestling, and for Dakota to someday become a state champion or at least a good man.

However… you know how life has a way of making us feel like we’re just living up to the way we envisioned how it would go? Well, once again, Dakota and I didn’t do any drilling, nor did we even hit the gym to lift some weights since his last wrestling practice last Monday night. Dakota was nursing a sore leg in the beginning and middle of the week. Later in the week, I was feeling under the weather. And over the weekend I was in Boston watching my two youngest daughters play soccer.

As we all can see, there almost always seems to be a reason for us not getting done what we want to get done. But, in the end, these reasons, or maybe I should say excuses don’t really make us feel any better, nor do they help us move forward towards our life goals. Hmm… Dang… Life…

Okay. Here we go again. One more time. It’s Monday night. And we’re in the car again. And on this ride over this father-son dual was having a hard

time believing that this was it. The end. This is our last preseason night with my old buddy, and an amazing and innovative coach, John Knapp. And Coach West isn’t too shabby either come to think of it. We’re going to miss these guys…

On the way over, Dakota talks about how he is pretty excited about his upcoming first high school wrestling season. At least one of his buddies is going out for the team. Dakota hopes his friend makes it and doesn’t quit. I remind Dakota that he is going to have to coach his buddy through the hard times, especially in the beginning. We can both still remember Dakota passed out sleeping all the way home after his first few wrestling practices.

We both know Dakota is going to have to help his buddy and teammate understand that the beauty of wrestling is its difficulty. It’s so awesome because it’s so damn hard. Period! The size of the challenge is what builds the warrior, as well as the young good man. We future good men need to embrace it because in the end, regardless of how tired we are, it’s good for us.

I pulled up to the industrial park building that houses KT KIDZ Wrestling and Dakota, and I ran into Johnny’s wrestling room. Wrestling practice promptly started. And right away Dakota ran out to the front of the pack during the warm-up jog where he stayed the entire time. A smile crept across my face as I’m reminded of myself always giving extra at that age, too, even if it was during just a warm-up.

As far as I’m concerned, being called a “Try-Hard” is a badge of honor. It worked for me when I was young. And those people who knew me best often commented that I would practically WILL MY WAY to a victory sometimes. Now, all these years later, my son seems to be getting closer and closer to understanding what that means. And I’m thankful he doesn’t let his classmates calling him a “Try-Hard” bother him either. After all, greatness really is all about effort, isn’t it? The growth-mindset stems from EFFORT! Not talent…

Coach Knapp and Coach West put the boys through a lot of drilling again, as well as the sparing once more through a wrestling technique called FLOW. I can see the boys out there on the mat are working really hard, sweating a bunch, and even getting a bit tired.

For live wrestling, Dakota somehow ends up wrestling one really good kid after another. He is forced to fight off one brutal half-nelson after another. I don’t know how he does it, but somehow he manages. On the way home, he told me his body went numb on one of them, but he refused to give in.

Wow… I actually wonder for a bit if I would have been able to fight off those, one after another, punishing half-nelsons back in my day like Dakota just did. I know I can’t do it today. My shoulder would rip. Heck, I think it might have ripped back then, too. Well, come to think of it, I do now recall now that my shoulder did tear one of those times I wrestled a guy that had placed in The Worlds. It still hurts to this day, even after surgery…

Coach Knapp finally calls an end to our last practice that we can attend. There is still one more practice, but my side jobs will keep us from getting to 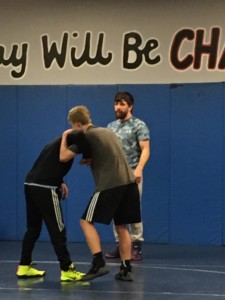 it. Now we had to say goodbye to everyone. We’re going to miss all these guys.

Over the last few months, we met and became close to a lot of great wrestlers and great people. I really enjoyed the time I got spend again with my old buddy, John Knapp. Johnny said that Dakota did a hell of a job and that he wished Dakota could have been there more. He even told Dakota to tell his father to stop working so much because it’s screwing up his wrestling.

Getting to know John’s protégé Coach West was pretty cool, too. Coach West is a great young man who has undoubtedly developed into a good man. At Johnny’s, I also reconnected with several people from East Hartford where I grew up wrestling and playing football thirty years ago. I became friends with several fathers in that wrestling room, too.

And Beth, one of the mothers there with four adorable young kids who also receive judo instruction of Friday nights in New Britain under Sensei Fox who is one of my former wrestlers who I coached back in the day, found a special place in our hearts as well. Dakota and I are going to miss all of them. I hope we get to see some of the wrestlers and their families again out on the wrestling circuit this upcoming season. But, because we live so far away, I don’t know how many of them we’ll actually see this winter.

On our last preseason car drive home I made a special stop to pick up some milkshakes for Dakota and me to enjoy during our 45-minute ride. As we 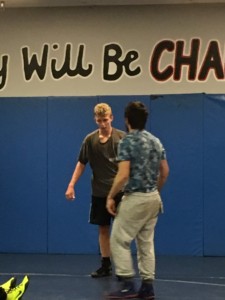 were waiting in the drive-thru line Dakota and I were talking about the upcoming season. I told him I’m going to try to get down to the last part of some of his practices, and that even though I can’t promise him I will be at every single match he has, I’m going to be at most of them.

He said, “Thank You.” I was confused. I didn’t know what to say. And as I was about to say something, the intercom went live and asked me what we wanted. I told them two milkshakes, took my foot off the brake, looked at Dakota and said, “Thank you for what?”

He said, “For being there.”

As I pull up next to the window to get the milkshakes, I’m feeling all warm and fuzzy inside because I’m breaking the cycle, and my son is now mature enough to at least say thank you. After I hand him his milkshake, I say, “You’re welcome.” 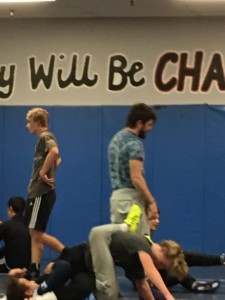 On the rest of the way home, we talked a lot about mindset and how it’s good to be a “Try-Hard” in between slurping our milkshakes. And when we finally pulled into the driveway and hopped out of the car, I looked back one last time at the passenger seat that my son Dakota had once again reclined. “Ah, we’re home,” I thought. The next day my wife will say, “What the heck happened to this seat?” while she is getting into the car.

What a great preseason this was. Now it’s time to turn the page to the next chapter of Making a State Champion or at least a Good Man out of my son Dakota. But first, we will eat some turkey, spend some time with family and friends, and hopefully squeeze in some drilling or at least the gym before the next Monday comes… Wish us luck…