HITTING THE MAT: The Making of A State Champ or At Least A Good Man! (Blog 14)

Wow! It’s finally here. We had a great preseason that ended with the reward of us eating a bunch of turkey on Thanksgiving. And Dakota, my son, and I were lucky enough to hit the gym twice to lift some weights and do a little running on the treadmill over the extended holiday between Thanksgiving and the official start of wrestling season.

On Sunday, Dakota and I were supposed to do some drilling, but Dakota woke up feeling sick. He still wanted to drill, but I told him, “No. He needs to rest because the first day of wrestling practice starts the next day.”

Hmm… Not sure now how his very first day of wrestling practice in high school is going to go for him. I imagine it would be very disappointing for him if he has to stay home sick on the very day, especially since he has been so looking forward to and preparing so hard for over the last three months.

Well, I guess time will tell how this all will go down…

My Monday workday comes and goes, and I leave work as soon as I can to do my one-hour drive home to see my son, Dakota, at his first high school wrestling practice. I haven’t heard yet that he stayed home sick, so I’m assuming that he’s in school and at wrestling practice as I’m leaving work.

I get to Dakota’s high school in time to see the last few minutes of practice. But first, I have to get by the security guard watching the front door. 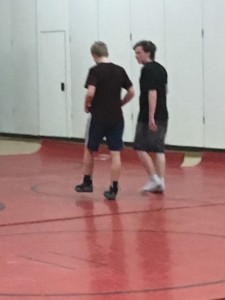 I learn that Tony, the security guard, is a former state champion wrestler from way back in the day, sometime around when I was born. I share that I was a 1987 and a 1988 wrestling state champion and that seemed to be enough to seal the deal that Tony and I were now instantly brothers in combat.

On the way out later that night I introduce my son Dakota to Tony. I share with my boy how I feel pretty good to have a former state champ wrestler watching over our students and athletes.

After signing in, Tony points me in the direction of the back gym. When I arrive there, I meet my son’s new high school wrestling coach. Coach Torres looks like the perfect coach for my boy, Dakota. Coach Torres is young, full of energy, and full of passion for the sport of wrestling, and developing young men. It also helps that Coach John Knapp from KT KIDZ Wrestling Program, who we had wrestled during the preseason with, put in a good word with me for Coach Torres.

As I’m talking to Coach Torres, I don’t see Dakota anywhere. I’m wondering if he stayed home sick. Finally, my eyes fall upon Dakota in the far corner popping out some extra push-ups. He’s with one of his fellow freshman buddies that he recruited to join the wrestling team with him.

Coach Torres compliments Dakota. Coach says that Dakota is going to do fine and that Dakota was even beating some of the varsity guys today. “Very cool!” I’m thinking. While trying not to smile too big in front of Coach Torres.

On the other side of the mat, I notice the assistant coach. He’s a big guy that looks around my age. He sees me and walks over to say, “Hi.” As we shake hands, we realize that we actually know each other from our old warrior days.

Thirty-one years ago in Iowa, we were teammates on the same Junior Olympic Wrestling Team. Coach John Knapp was on that team, too. Scott and I haven’t seen each other since that time back in Iowa 31-years ago. And now all these years later, this fellow-warrior, and friend from my past is now helping coach my son, Dakota. Small world, huh? It looks like Dakota has two great coaches now at his high school.

On our ten-minute car ride home, I shared with Dakota that he should be wrestling with Coach Rogers’ son, who I couldn’t help but notice was really good during practice, and Coach Torres every practice as well so he can get better.

I also noticed that Dakota was talking funny, kind of nasally, and he was sniffing a lot. Hmm… We pulled into our driveway, and Dakota commented that that was a quick ride home. I wholeheartedly agree with him. We didn’t have a whole lot of time to talk about much like we had been doing on the 45-minute ride home we had been doing from KT KIDZ.

As we get out of the car, I look back at Dakota’s seat and think, “Well, I guess the car ride wasn’t long enough this time for him to recline his seat like he had been doing on the way home from Coach Knapp’s practices in Rocky Hill. I was kind of sad that we didn’t get a whole lot of time to talk. But, I suppose that even a little bit of time for a father and son to talk is still better than no time to talk.”

Ah… Dang… I knew it… It’s the middle of the week, and Dakota is still sick. It’s the first week of wrestling season, and he’s staying home sick from school and wrestling… Hmm… Not the perfect start… but building a good man through wrestling is a long road, so I’m not too worried yet…

The end of our first week ends with a pleasant surprise. Coach Torres takes his high school wrestling team to his alma mater, Windham high school, for a workout. I’m pumped because I am well aware of the long history of Windham’s great wrestling teams and great wrestlers. Dakota will have a lot of very tough kids to work out! And what could be better than that, well, at least for a wrestle, right?

I couldn’t stay for the practice because I had other responsibilities to fulfill at home, but when I came back to pick up Dakota, I saw the 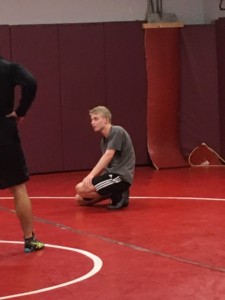 Windham coach, Coach Risley. We embraced in a big hug like two fellow warriors who hadn’t seen each other in many years. And we rapidly spoke to try to quickly catch up on what the other had been doing. It was such a pleasure and such a joy to see Coach Risley again, and to have my son Dakota receiving some wrestling instruction from another one of Connecticut greats in the sport of wrestling. Check out this great YouTube video the Norwich Bulletin did on Coach Risley and Windham High School winning its tenth state championship in wrestling: https://www.youtube.com/watch?v=lvZveN1EWh8.

The ride home was a special one on this day because I had to bring Dakota’s friend home, too. So, we all got to spend some time in the car. Just us men, or emerging men maybe I should say. We talked about wrestling, and I talked about life with the boys like how they need to learn financial literacy and develop multiple income streams as young men, so they don’t become financial slaves like most of us, and they can be in charge of their own destinies and become the kind of men they want to become, while serving no master.

During our car ride home another really cool thing happened. My phone rang, and I put my old warrior buddy Gus on speakerphone. Gus was also on that Junior Olympic wrestling team with me, and Coach John Knapp, and Coach Rogers. Gus is now a firefighter in San Francisco. Gus is also the founder of my son’s wrestling team. Way back in the mid-80s, Gus was a one-man wrestling team. The things Gus had to do to get my son’s team started was way beyond what most of us would have done. You can read a little bit about my old buddy Gus in this New York Times article that was written about him back when we were still young warriors: https://www.nytimes.com/1987/02/24/nyregion/our-towns-one-man-team-a-game-wrestler-gets-off-the-mat.html.

What a treat it was this week for the boys to indirectly meet my old buddy, Gus, the founder of their team. He might even show up someday in the near future here on the east coast to meet the boys and the coach of the present day team. It was also a treat to see Coach Risley and have him help coach my son, as well as my other old buddy and warrior-friend Scott Rogers who is also helping coach my boy. And we can’t forget our state champ doorman, Tony, who is watching over our kids and making sure they are safe.

It really does take a village to raise a child, especially if we’re trying to help mold that boy into a good man someday… Can’t wait to see what next week brings…