Dang! Just as Dakota was starting to turn the corner and really step up his game! This last weekend might have been his best performance in a varsity tournament so far… But here we are again running into some very frustrating obstacles at the beginning of this week eight of his regular high school freshman season.

Dakota woke up Sunday morning four pounds overweight. The cycle of his distressed weight management continues. And not only has that, but his knee problems and neck problem continued as well. And now a very common problem of a swollen, black and blue, puffy ear has also finally arrived on the scene. I let Dakota know that he needs to wear his headgear in wrestling practice or he’s going to get cauliflower ear. And it will hurt, along with everything else.

My wife, Jennifer, suggested that perhaps I shouldn’t be telling the whole wide world what is hurting on Dakota. This might be unnecessary information that maybe his opponents shouldn’t have. After thinking about it for a moment, I replied with, “All wrestlers are hurting from something. That’s just how this game is played. It’s just a fact of life for a wrestler.”

During the day, Dakota asked me a few times about working out so he could lose some weight. But I tell him he has to wait because I’m buried in my responsibilities of a father of five children who works multiple jobs. Yes! Even on a Sunday! The good Lord might have rested on the 7th day, but unfortunately, I can’t.

Eventually, Dakota told me he’s going out for a run on his own, instead. He also mentioned that his knee is sore.

I told him not to run. And that maybe later I can hopefully get him to the gym to ride a stationary bike, which will be easier on his knee.

He decided instead to go for a run anyway. And in a way, I can’t blame him because he’s still an impatient teenage boy, and his father has an overgrown to-do list. Plus, I also know that running is one of the better ways to improve one’s conditioning and lose some weight, as long as you bundle up.

Later, Dakota returned from his run. And the first thing he said was, “Dad, my knee hurts.” From across the room, I could see that it was swollen. Once I got close to it, I could see that it was the size of a softball. Dang! He looks like he’s going to miss some wrestling now. And I don’t know how he’s going to make weight for Wednesday night’s match. I should have looked at his knee before he left for his run. I’m kicking myself for this one.

Dakota wakes up with his big puffy knee still there on Monday morning. He can barely walk. I followed his old man walk into the bathroom where he checked his weight. This is becoming our morning routine. Crap! He’s 134-pounds. Now he’s six pounds over his weight class, and he can barely move. This is not good.

Now I’m very concerned about him making weight for Wednesday night’s match. I honestly have no idea how he’s going to wrestle, or how he’s even going to make weight if he can somehow wrestle. I also know that this must be tearing my 14-year old boy up on the inside, too.

My wife, Jenn, and I go back and forth on what steps to take next. I keep insisting that he sees the school’s athletic department trainer. Jenn keeps insisting that she take him to the doctor’s office, and then she’ll bring him into school later to see the trainer.

I assume most of us out there already know how this is going to go down when a mother bear has a hurt child. Jenn wins this one, and Dakota goes to the doctor’s office with his mom that morning, and then the orthopedic specialist later that afternoon. Then he goes to the trainer.

Wednesday comes and goes, and Dakota doesn’t wrestle. He sits on the team bench, and I sit in the bleachers showing other parents pictures of Dakota’s knee to help explain why he isn’t wrestling. All the parents are very nice. They all say that he’s just a freshman, he’s got plenty of time still to wrestle still. So it’s not a big deal. The important thing is for his knee to get healthy so he can wrestle again when it’s the right time.

I fully agree with them. But, I also know that it was not easy for Dakota and me to just sit there and not have anything invested in our team’s win that night. And win they did. They won big. It was a bittersweet night though. And Dakota is still four pounds overweight…

“WHAT! What do you mean Dakota is being rushed to the emergency room?” I hear myself asking at my wife, Jennifer, who had just called me at school on Friday afternoon.

“I will meet you at the Hartford Children’s Hospital as soon as I can get out of here,” I say trying to soothe Jenn.

When I arrive at the hospital, I see Dakota is in the most pain like he has never been before. He’s holding his stomach and squirming around while his waves of heavy breathing fill our ears and tug at our insides.

“How long has this been going on? I ask Jenn.

“For about four-hours now. And this isn’t even the worse of it. The pain was way worse earlier.” 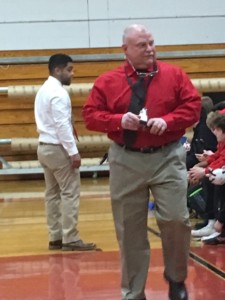 “Have they given him anything for the pain?” I ask.

“No. They haven’t because they might have to operate,” Jenn lets me know.

Oh, my gosh! As a parent, you all can imagine how the worse is going through my mind. They’re going to cut my little boy open. He’s going to be in crazy pain for a long time! His wrestling season is over. He may never wrestle again… He’s going to miss a bunch of school. He’s right in the middle of midterm exams. The medical bills are going to be crazy expensive because even though I have what used to be good medical insurance as a public employee teacher, they have been chipping away at my coverage a little bit every year. Jenn and I try not to even go to the doctors anymore if we can help it.

Life shouldn’t be this way. Just like so many of you out there, we’re just middle of the road, middle-class people, who work hard every day to try to raise our children the best we can so they can go forth someday and do their part in making this world a better place. But, obstacle after obstacle appears in our paths, and as all of you out there already know, life is just plain hard. It can never be easy, and just be a straight road from point A to point B. And that’s a fact, isn’t it? 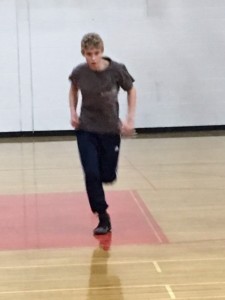 We’re worried stiff over what’s going to happen to Dakota. And then something amazing happens… Do you remember that scene in the Forrest Gump Movie where Forrest, played by Tom Hanks, just stops running for no reason at all, and says, “I think I’ll go home now? Well, believe it or not, why squirming in pain, Dakota all of a sudden sits up and says, “I think I’ll go home now.” Out of nowhere, the crippling, debilitating pain just stopped. And now he was ready to go home.

How weird…? What the heck just happened? Soon after, all of Dakota’s medical tests returned negative. But the doctors kept Dakota for a couple more hours of observation just in case he relapsed. After a few hours more of laying in one of those little beds in the emergency room, they told us that it might be viral, and to go on home. Call them or bring him back if it starts up again.

I let Coach Torres and Coach Rogers know why Dakota missed wrestling practice, and they responded back with keeping Dakota home from Saturday’s wrestling. We all obviously have mixed emotions. Dakota wasn’t going to wrestle anyway because of his huge knee, but it would have been nice to at least sit on the bench with the team. And now throw into the mix this whole mystery viral thing, too… And once again, life is a mixed up bag emotions, thoughts, and dreams.

Maybe this is a blessing in disguise… Maybe Dakota needed a week off… Let’s all hope for the best for Monday… And for the team today. Since I am not at wrestling today, I thought I’d at least write about wrestling today. And after I do a bunch of snow shoveling this weekend, I sure would love to see Dakota healthy and back out there on the mats on Monday as he continues his pursuit of someday becoming a State Champion or at least a good man… Speaking of a good man, he’s going to have to help me shovel some snow this weekend, regardless of his knee or viral thing…