Well, we survived shoveling our 640-foot dirt-driveway in the frigid cold, snow, and ice this weekend. But outside of doing what we had to do to survive and be able to function in another New England storm, there wasn’t much else happening for Dakota.

The weather kept the kids out of school, so there was no wrestling practice. The weather has also kept Dakota pacing in our living room and dining room. He’s filled with mixed emotions. With every day that passes without any wrestling, his knee and other injuries are getting better. And thank goodness he hadn’t had another stomach episode since Friday when we had to rush him to the emergency room for what we thought was a ruptured appendix.

But… and it’s a long but… It’s also now Tuesday, and Dakota is getting rustier by the day. He’s falling more and more out of wrestling shape. And he’s also five pounds overweight for tomorrow’s match. Getting better or getting his weight down… How do we choose? This sure is a tough sport! It’s a maker of men! It forces one’s hand almost on a daily basis. There is no sitting on the fence in this sport.

Well… it turns out that Dakota and I aren’t going to have to choose, after all. The trainer just let us know that he examined Dakota’s knee and that Dakota will stay on the sideline as just an observer for the rest of this week. Another week out. And another week for Dakota to pace my living room and dining room floor… Is this another one of the blessings in disguise? Because right now it doesn’t feel like it… However, I suppose time will tell…

On the car ride home, Dakota shared with me how frustrated he was with the whole unfortunate situation. The other kids are getting better, and all he can do right now is just watch and hope his knee heals soon.

Wednesday night finds me again in the stands watching our high school wrestling team wrestle, and looking over at my boy Dakota sitting on

the bench injured. Yeah… you’ve guessed it. This is a real bummer for all of us. The good thing is that Dakota’s knee seems to be getting better every day, and his team wrestled a great match and pulled out a great victory even though they had to give up several forfeits that gave the other side six points for each one.

Also, as I was watching the other team wrestle, I noticed that two of their wrestlers were kids that Dakota wrestled with over the summer with KT Wrestling in Rocky Hill with Coach John Knapp. So, that was kind of cool. And even cooler… their coach was Paul Myers, a guy who I knew a long time ago.

When I was the New Britain coach, Paul was one of the Hartford wrestling coaches. I also wrestled with his younger brother, John Myers, many years ago in the Junior Olympics out in Iowa. And come to think of it, their father, Dr. Ed Myers used to be a gym teacher in my old high school. The whole Myers family was filled with great wrestlers and were a real force to be wrecking with. Paul and I had a great time catching up some at the end of the meet that night.

On the short seven-minute ride home, Dakota and I talked about wrestling, and he told me that his knee was all of a sudden hurting him bad again. I took a look at it when I got home and saw that it once again was the size of a softball. What the heck happen? It was getting better. How the heck did it blow up again? We were all figuring he’d be wrestling again on Monday. How long would he be out now? This whole thing was driving Dakota, his dad, and his coaches crazy…

Now things are getting really tricky. Thursday night I have to leave for a speech I’m doing in Red Lion, Pennsylvania. It’s a six-hour car drive, and I’m going to be gone for a couple of days. Dakota is going back to the doctor’s office on Friday to get his softball-size knee drained. Since my wife is with me, neither of us will be there for him. Thank God grandma will.

My first speech in Red Lion, PA. to the school’s administration team goes very well on Friday afternoon, and their Superintendent Scott Deisley really makes me feel like part of their family. After the speech, we went over to Red Lion High School to watch a colossal college wrestling match between Lock Haven and Arizona State University.

again to make sure that my wife and I are having a great time at the match as their honor guests. And I can’t thank them enough for this special treatment. Scott, Arnie, and the rest of the Red Lion School District staff, students, parents, and community are doing some amazing things over there.

Sadly, during this incredible night at their fantastic facility, my wife Jennifer is going back and forth on her phone with grandma and Dakota checking up on his status. Eventually, the final verdict is in from the doctor. Dakota will be out four to five more weeks. If it’s five weeks, his season is over.

Our goal is four weeks for him to get healthy, then somehow we have to get him in shape again, and enter him in the States. As bad as this may seem, especially to Dakota and his coaches and teammates, there may still be some light at the end of this tunnel. The night ended on a very positive beat with Lock Haven University who was ranked #22 in the country upsetting #12 Arizona State in a thrilling match. There’s just something about those Pennsylvania wrestlers…

The next day was a busy one. Saturday morning I woke up very early and went and gave an amazing speech to the Red Lion School District coaches and athletes. They were a fantastic group. If I lived closer, I think I’d somehow find myself over there a lot.

Right after the speech Jenn and I jumped into the car and sped back to Connecticut to try to catch some of the wrestling tournament that Dakota and his team were at. Jenn and I got there just in time to see the finals and semi-finals. Our team did awesome. We only had nine kids wrestling out of the fourteen weight classes. And out of those nine wrestlers, seven placed. It was an amazing day for our wrestling team. And we just got inched out at the very end from placing in the top three as a team. Everyone said that if Dakota hadn’t been hurt, we absolutely would have taken 3rd place as a team… Oh well… what are you going to do…? That’s life… That’s just how it goes sometimes… And that’s what wrestling teachers you.

Now for a bit of nostalgia. The wrestling tournament was held at Rocky Hill High School, and the head coach Paul Myers, yeah the same one 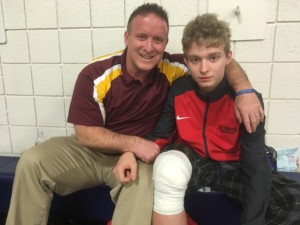 from this past Wednesday night, was the announcer. So, it was good to see him and talk to him again. The tournament was called the “Doc Myers Tournament” named after Pauls’ father, my old high school gym teacher in East Hartford, Dr. Myers.

Also, Avon won the wrestling tournament with an outstanding performance that day. One of the parents told me that the team is undefeated so far and it’s the best team that they’ve had since 1986.

I told him that I can still remember that 1986 team of Avon. He smiled big and said proudly that the coach who they presently have was a wrestler on that team. And I responded with, “I know. I wrestled Coach John Mclaughlin in the 1988 semi-finals of the Connecticut State Open Championships. We were both undefeated wrestlers, and everyone was anticipating that it to be the match of the night! John was the Class L State Champ. And I was the Class LL State Champ. It was a great match, which I can still vividly remember to this day.”

Wow! Do these blasts from the past ever cease in this amazing sport of wrestling.

Now somehow we have to keep Dakota’s spirits up for the next four weeks. It’s not going to be easy, but on the positive side, Dakota is still part of the team, and we will be at all of the wrestling practices and events. And I’m sure we’re going to see some excellent wrestling along the way and spend some real quality time with the people who love this sport, too!