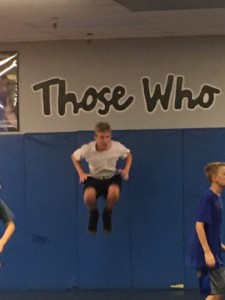 Well, another week and two more wrestling practices are under our belts. In the last blog, I shared with you that my son Dakota’s first pre-season wrestling practice had caused him to become so tired and worn out that his vision became blurry. In addition, his calf painfully cramped up while trying to get in the car, and then he quickly passed out on the car ride home.

On the following day when Dakota was rested, and walking normally again with no visible traces that he had been in a battle the night before, I spoke to him about how he had felt the night before. I told him that ironically if he wanted to get beyond that feeling of being wiped out beyond belief that he was going to have to do more.

Now, common sense would say that if you are already physically wiped out, then how the heck would anyone expect you to do more? Well, I suppose, being a wrestling champion, or even just a good man that can battle through the pain and fear isn’t very common. So, sometimes you have to do the uncommon thing, or maybe the thing that you may believe doesn’t make sense, such as doing more when you think you can’t do anymore because this is what will make your future easier.

Hey, either way, you’re going to pay. So, you might as well pay now by doing more so you can be in a better position later to play rather than pay in front of all of your family and friends when you wrestler your next opponent. If you don’t pay now, you’ll surely pay later in a place where you’ll be much more embarrassed when your opponent plays with you in front of your home crowd. I know I wouldn’t want that to happen. What about you? Are you willing to pay the price now?

Well, I don’t know if this all sunk into my son Dakota’s head or not. Or if we just did more drilling and less live wrestling this week in practice causing practice to be easier this week at John Knapp’s KT KIDZ Wrestling program. But, surprisingly both nights this week my boy Dakota stayed awake during the car ride home and physically appeared to be fine both on the mat and in the car going home.

Tuesday night’s car ride home was a bit humorous. Well, let me frame this by saying that many times the humor doesn’t come during the moment, but rather later when we think back on it. Let me explain what I mean. During Tuesday’s practice Coach Knapp and Coach West had showed the wrestlers a slide by wrestling move and then sent them off to their little special places on the mat to practice it. The slide by move is not the easiest move to master. So, my son was struggling with it, of course. And as any good father would do, I kept trying to instruct him from the side of the mat without stepping onto the mat because I’m a parent wearing work shoes, not one of the coaches in wrestling shoes. You can picture this, right?

Well, no matter what I said to my boy from the side of the mat, it just didn’t seem to help him do the move correctly. So, I finally resorted to being less technical and tried to put it in the simplest form of communication as possible that I could think of at the moment. Every time he did the move he then turned and looked at me, and I kept just simply saying, “Get your head out of the way when you’re trying to slide by him.” Simple, right?

Well, now here comes the funny thing that I alluded to above about the car ride home on Tuesday night. As I was driving and talking to Dakota about practice, he says, “Hey dad, I was trying to get that slide by move right, but every time I looked up at you, all you said was to get my head out of the way. And I had no idea what you were talking about. But, you just kept repeating to get my head out of the way, anyway.”

Wow! Parenting, and being a parent trying to coach your son from the side of the mat is humbling. I was a bit stunned and at a loss of words at that moment when Dakota basically said I wasn’t helping him. Dang! He kept looking to me to tell him what he was doing wrong, and all I could eventually say was to get his head out of the way. I might as well had been speaking Greek to him because he had no idea what the heck I was talking about. And I didn’t seem to know what other words to use to communicate with him in a way that he could understand. And furthermore, here we are in the car driving home, and I still couldn’t seem to figure out what to say to him either about those imperfect or maybe even screwed up exchanges that took place between us in wrestling practice that night… Hmm…

Well, forty-five minutes later our car pulled into our driveway, and we got out and went into our house. Inside I decided to leave that whole slide by thing alone for now and just instruct, or better yet, show my son Dakota on a couple of minor things on defending himself better. For example, he didn’t know what to do that night when his opponent was on top and grabbed his ankle. In addition, I also taught him how to better defend himself against the double leg attacks by staying on his feet more and not allowing his knee or hip to drop to the mat.

Furthermore, I also let Dakota know that he only had to improve just a little bit every week. And now if he knows how to free his ankle when he is on the bottom, and better defend the double leg attack, even if it’s just a little bit, then he’s already improved some for the week. And if he keeps making these tiny improvements every week, then he’s going to be just fine for this upcoming season.

During Thursday’s practice, I noticed Dakota is scrambling a little bit better and not always giving up the easy points when he seems to be in some

trouble. I’ve been drilling into his head never to take the easy road, and never to give up the easy points even when he’s in trouble. He needs to make his competitor earn every point against him. He needs to make his opponent knows every single second that he’s in a fight so Dakota can physically and mentally wear him down. After all, didn’t the great Coach Lombardi from the Green Bay Packers’ fame say something about fatigue making cowards of all of us? I say let’s use that good advice to make cowards out of our opponents.

While finishing up practice that night, Coach John Knapp came over and stood next to me, and we both watched Dakota wrestle. My old buddy John said, “Dan, Dakota is pretty good for a kid that has never wrestled before.” I whole-heartedly agreed. Then Johnny also said, “Heck, he might even be more athletic than you were at that age, Dan.” I was happy with this comment too; however, I must admit that I wasn’t fully sure what to make of that one. I was thinking. “Hey, what do you mean more athletic than me!”

Well, when I got home that night and told my wife, she said that it’s probably true and that now I’m supposed to be proud of my boy’s athletic abilities. And you what? I then agreed with her, too. And I am proud of Dakota’s athletic ability, and in no way does it diminish what I did on the wrestling mat when I was his age.