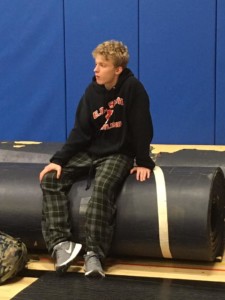 Wow! November 30th has rolled around again. It’s getting to be near the end of the year 2020. This has been one heck of a year for most people around the U.S. and the world.

Today, I am 51-years old. For much of my life, November 30th meant wrestling practice as an athlete, coach, and now as a father/coach. November 30th is always a very long day for me. Often my birthday takes a back seat, and we just sort of squeeze it in around everything else that is going on.

However, this year is peculiar because there isn’t much going on at all. There is no wrestling happening in Connecticut because of the pandemic. Covid 19 has shut everything down around here, including wrestling. We haven’t wrestled here in Connecticut since the last high school season, which ended last February.

My kids were sent home from their schools last March to do remote learning because of the deadly pandemic that was sweeping the globe. And here we are on November 30th, the following school year. All five of my kids are home from school learning remotely, including my college-age daughter, Kalaiya.

So, when I say a lot is going on and not going on… I really mean it. This Corona Virus is crazy and deadly, and it’s rapidly spreading more and more each day. But at the same time, my family seldom leaves our home now. We really aren’t doing much at all.

Now, that may change someday. But, right now, Dakota is a 16-year old boy who dreams of winning a state championship in wrestling. Last year, he tried to take the mat, but his knee surgery kept him on the sidelines. Now, Covid 19 eliminated all off-season wrestling and is threatening to destroy this school year’s season. Dakota has been dealt an awful hand for someone with the goal to improve every day in wrestling and earn a spot at the top of the awards podium at States.

Like some of the other kids out there, Dakota has a little weight set in the basement. It isn’t much, but he’s trying to make due. And any kind of workout right now is better than no exercise, right? Dakota has also been running our driveway. We have a very long 465-foot dirt driveway that is slightly uphill all the way. So, with not much else to do, Dakota has been out there trying his best to run it and keep somewhat close to wrestling shape. However, anyone who has ever wrestled before knows that the only way to really stay in wrestling shape is to wrestle.

We really could use a small wrestling mat in the basement. However, we don’t have one. Every once in a while, Dakota and I go down to our unfinished basement with its concrete floor and do some slow, deliberate neutral drilling. Again, it’s frustrating knowing how limited we are right now. But, again, I guess any kind of workout is better than no workout, right. We’re trying to stay positive and do something that will at least help Dakota hold his ground with his skills and conditioning. We can’t let this pandemic push him all the way back to square one.