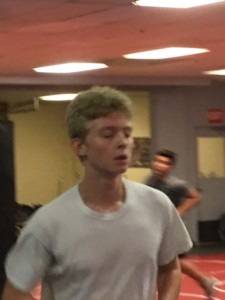 I notice for the first time tonight that the leaves here are really starting to change colors. It’s a cool Monday night on Columbus Day in early October in the northeast part of Connecticut or the quiet corner, where I live with my family.

Things have been a little rough here since my son, Dakota’s, last pre-season wrestling practice over at KT KIDZ Wrestling program. I had good intentions and planned on working with him over the weekend on that front-headlock I’ve been telling him about. But, unfortunately, I got sick and spent most of the weekend in bed. On Sunday night I was determined to show Dakota that front-headlock, even if I had to crawl out of bed to do it. However, now there was another obstacle. Since I usually do not sleep much on a regular basis, my back couldn’t handle laying most of a 48-hour period in bed, and now my back has gone out on me.

Now it’s Sunday night, I’m still sick, a bit dizzy, and I can’t move too well because of my back spasms. However, I’m determined to help my boy. I feel a bit like I’m in a wrestling match of my own while trying to get out of my bed and get down on the floor to show Dakota the front-headlock. My wife soon walks by and yells at both of us. And I eventually end up back in bed trying to get well again. Hey, regardless of how it looks though, I’m still calling the front-headlock instruction a victory for the boys.

To compound the complexity of things, my wonderful mother-in-law wants to take our whole family to do a Halloween outing on Monday night up in Rhode Island. Furthermore, my wife strongly encourages Dakota and me to do the family thing instead of going to wrestling on upcoming Monday night. I left the decision up to Dakota, and he picked wrestling. Miraculously, my back pain and cold let up enough in time for me to get in the car and drive Dakota to wrestling practice on Monday night. Thankfully, I had that day off from teaching school.

On the way to practice Dakota talked about the upcoming physical education test at his school this next Thursday. His goal is to break the six-minute mile. Last year as an 8th grader, he did it in 6:08. We also talked about him doing the necessary work in his Math and Latin classes. And then he took a little nap for the rest of the ride.

Upon arriving at practice, I noticed the Columbus Day Holiday caused the number of wrestlers at practice to be a little less than usual, and unfortunately Coach West couldn’t make it either. Coach Knapp ran practice alone tonight. The calf injury he had last week seems to be better as he is no longer limping. Aging in this sport is tough…

Tonight Coach Knapp showed some pretty cool breakdowns from the top riding position that Dakota was, fortunately, able to utilize almost immediately in the live wrestling part of practice tonight. My son, Dakota, looks like a new wrestler out there this week on the mat. Against his first few opponents for mat wrestling, he kept his hips low, covered his opponent’s hips well, and even managed to trap his opponent’s arm just like Coach Knapp showed earlier.

At one point when Dakota was on the bottom, and his opponent was riding him high, Dakota even bucked-up his hips, and his opponent fell off of him. Dakota was then able to gain a two-point reversal. I haven’t even shown him that buck-up move yet. “How the heck did he know how to do that?” I wondered. Well, it certainly seems like he is gaining a better understanding of hip-riding and good hip position. Knowing those two things better certainly will help him a lot in wrestling.

Near the end of practice during Dakota’s six-minute live wrestling match tonight, Dakota wrestled a tough kid. However, my son got the first takedown and then successfully rode his opponent for the whole first period. Pretty cool. He’s getting better. At the end of the first period, Dakota is up 2-0.

The next two periods of this six-minute match didn’t go as well for Dakota. His opponent got him into several cradles that exhausted him. His opponent also put him in a couple of can opener moves while leg-riding him. I was scared that this boy was going to injure my boy when he was making a wish with my son’s legs. I could see the pain on my boy’s face, but I stayed put, and let my boy fight through it, which he did. I asked him about it later in the car, and he said there was no way he was going to let another kid injure him, or pin him.

Dakota looked wiped out at the end of practice. And surprisingly he even asked me to feel his tongue, which, by the say, was as dry as sandpaper. He took a few swigs of water, a few minutes to rest, and then did extra push-ups, then pull-ups, and then went back to do more push-ups again. Pretty impressive I thought, as I silently watched while leaning against one of the wrestling room’s padded walls.

Surprisingly, all the way home, one would have never known that Dakota just worked himself to near exhaustion in wrestling practice because he was so excited and pumped up as we talked about wrestling. When we pulled into our driveway 45-minutes later, he asked me how we got home so quick. “It felt like we just left wrestling,” he said

I’m pretty happy for him. And now if I can only find some time to work on those cradles and can openers before his next wrestling practice, so I don’t have to watch him suffer through them again. I know the next day will be another marathon day for me, and I won’t be home until late… but I’m going to try my best. And if I fail, well, at least I still have Coach Knapp and Coach West to teach Dakota what he needs to know next at KT KIDZ Wrestling. After all, making a young boy into a good young man is a team effort, right?

And speaking of that team effort, or village raising a boy into a good man, my wife called me on my way home on Tuesday after a long day at work teaching followed by me taking and passing my real estate exam. Unfortunately, it’s tough to raise a family on a teacher’s income, regardless of how good you are, or how hard you work. However, that’s a topic for another article on another day.

So, getting back to the village, or my wife. She is on the phone, and she is upset with Dakota. He’s acting immature again by dragging his feet 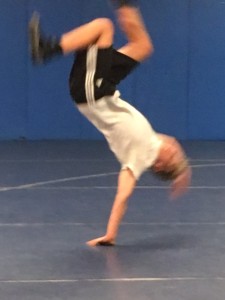 when she asks him to do something. And then he is trying to turn her request into a debate. She’s mad, and she wants to take away wrestling from him on Wednesday night.

I want her to take away electronics instead. Now we don’t always see eye-to-eye on everything, though. I tell her that Dakota likes electronics, but he doesn’t need them. But, he does need wrestling because wrestling is hard. And hard things build character and helps him mature. I promise to talk to him when I get home.

When I do finally get home, I go to Dakota’s room and speak to him about how he is supposed to be maturing and doing his duty as a good son by listening to his parents without debating. After a little more talk, I work with him on the cradle and can opener move. Hopefully, he’ll be better prepared come Wednesday night. And hopefully, he’s maturing. 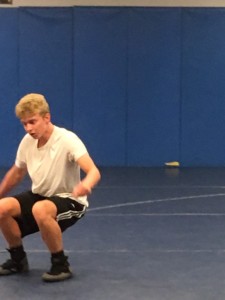 Wow! Wednesday night is here. And I didn’t see this coming. But I should have. I rushed home Wednesday night from a long day at work and found Dakota sick. I guess he has what I had. Dakota won’t be going to practice tonight. Nor will he break that six-minute mile in school on Thursday. He might have to wait until next year’s school physical education test to break the six-minute mile. But hopefully, a dream deferred isn’t a dream denied, right? And hopefully I’ll find some extra time around my side jobs this weekend, and Dakota will be well enough for us to do some drilling of wrestling moves before he goes back to Coach John Knapp’s next Monday night wrestling practice.

Wish us luck… nothing ever comes easy… especially when you’re trying to build a good man!