HITTING THE MAT: The Making of A State Champ or At Least A Good Man! (Blog 6)

It’s Monday night again, and once again Dakota and I are back in the car heading to another pre-season wrestling practice after consuming another dinner in seven minutes or less. These pre-season days are so busy. As a matter of fact, all of these autumn back-to-school days are busy. I feel a little bad today because I didn’t do any drilling with Dakota this past weekend. He came to me Friday night about 9:30 after I just had gotten home from work to drill, and I told him, “I have been going non-stop since 4:00 A.M. that morning, and I was just too tired. We’d do it over the weekend.” 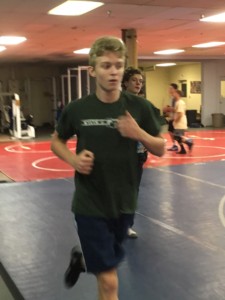 Well, guess what? I ended up working one of my multiple part-time jobs that supplement my full-time job’s income all day on Saturday, and again all day on Sunday. The weekend passed, and I didn’t drill any wrestling moves with my boy, Dakota. Hmm… I’m going to have to figure out a way to do better by my son. He deserves at least that much…

During practice, Dakota seems to be doing well. A funny kind of thing happened at practice that night. Coach John Knapp quickly referenced defensive moves off of the bottom position that he never wants to see his wrestlers use. The funny thing is that when I used to wrestle, I used those two moves frequently. I even used to show those moves to my wrestlers when I was a coach.

Coach Johnny Knapp instead showed what the wrestlers should really be doing when on the bottom, instead of those two moves. And after some reflecting, I had to give it to Johnny. His way was indeed better than my old way.

Bear with me for a moment, and I’ll try to explain the reason his way is better than mine. In the old days, a wrestler would hit one of his moves on me, and then I would sometimes counter it with one of the two moves that Coach John Knapp said never to use. However, when looking closely at Coach Knapp’s way of wrestling, one doesn’t use these two particular moves because instead one counters with Coach Knapp’s moves at the beginning of their opponent’s move, instead of at the end of it, as I had been doing all those years ago. Johnny’s way doesn’t even allow the opponent to hit the move in the first place. My old way did allow my opponents to hit the move and then attempted to counter it after it was executed.

When I spoke to Johnny that night about the brilliance of this way of wrestling through not even allowing the opponent’s move, he said, “Our goal here is to beat the top five wrestlers in the country, not the bottom five.”

If my son, Dakota, continues down this road with Coach Knapp and Coach West, then there could be a real possibility that by the end of next year, his sophomore year, Dakota could be more technically sound than I am in the sport of wrestling.

Not sure how I feel about him being better than me by the end of only his sophomore year. However, I guess I feel good and bad. I’m very proud and happy for him if he can indeed pull this off. But, I’m also wondering if, at some point, I should go buy some wrestling shoes and begin learning

some these newer moves and techniques, too, that Johnny is showing so I don’t become obsolete. I really would like to be able to continually add to my son’s wrestling education throughout at least his high school years before he is out of my league.

Tonight’s live wrestling segment was all down on the mat. At first, I was a little nervous because this is an area of weakness for Dakota. But then I rebounded and was grateful because I know Dakota needs some extra mat time so he can learn what to do down on the mat.

On this night, I found myself continuously yelling out, “Head up! Look away!” At one point, Dakota got one of his opponents in a cradle, but didn’t know what to do until I yelled, “Put your knee in his back and pull him over it.” He did and successfully pinned the kid.

All and all, it was a pretty good night of wrestling for Dakota. It got even better when on the long drive home he said, “Hey, Dad, you want to know why I’m going to be really good at this sport someday? It’s because you didn’t’ force me to come here and wrestle. It’s because I want to be here. And I want to get better at wrestling.”

Wow! Was all I could think of…He’s already beyond his years…I can already see the good man coming out of him…

As Wednesday night’s drive rolled around after another seven-minute dinner, I’m kind of kicking myself once again because I didn’t have a chance to work with my son, Dakota, since his last wrestling practice. Again, I got home way to late last night from work. And tonight I got home just in time to eat in about seven minutes, and then dash out the door with Dakota for that 45-minute car ride to John Knapp’s KT-KIDZ wrestling practice. 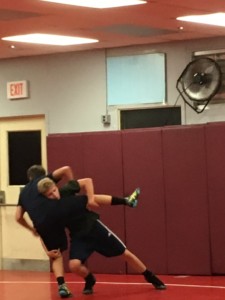 During the ride, Dakota took a short nap. When he woke about halfway there, we talked a little bit about life. Dakota told me that school has been burying him with homework, especially his math class. The math teacher gave him 50 math problems tonight that he had to do before I’d take him to wrestle. Dakota didn’t think it was fair. He thought maybe the math teacher should only give him 15-20 problems to solve. Dakota was frustrated that he just hasn’t had any time to himself lately since school started back up and now he is in high school, instead of the middle school like he was last year.

I told him, “I get it, buddy. I hear you. I have no time either. And I know it’s hard.” However, as a high school teacher myself, I’m not picking sides because I can see the arguments on both his side and his teachers’ side…

Once we got to practice and warmed up, Coach West and Coach Knapp reviewed the bottom moves we had learned on Monday night. And then the wrestlers got busy working on them again.

Next, the coaches showed some top techniques of better positioning oneself and knocking the bottom wrestler off balance so he’d be weak. This was good I thought. We all like making our opponents weak.

The time spent in mat wrestling was helpful for my son, Dakota, but as we all already know, these things take time. Dakota still wasn’t entirely sure what to do out there tonight during the live wrestling part.

At one point, he got so frustrated after another roll left him getting pinned again that he walked over near me and asked me what he’s supposed to do. I instructed him to leave the rolls alone, and just work a strong base, wrist-control, and then just stand up.

With the next kid, he tried this, and it actually worked! I was so happy that he decided to listen to me. You all know how teen boys are. Them actually listening to you, doesn’t happen every day. Back in neutral, Dakota took his opponent down, I found myself then yelling, “Cover his hips!”

Soon after, Dakota surprised me again when his opponent was getting away from him, and Dakota attempted to drop down to his opponent’s 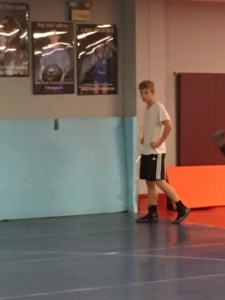 ankles to bring him back down to the mat. It didn’t work. The kid still got away. But hey, at least he tried, right? He’s listening… at least a little bit…

The car ride home that night was interesting. Dakota mentioned how nice the other boys at wrestling are and that they try to help him learn some of the moves. We talked about how hard and demanding wrestling is, and how’s it’s a badge of honor to have wrestled for even a little bit. I told Dakota that it’s good to do hard things. And because wrestling is so hard, it brings out a brotherhood in wrestlers that unties them no matter where they come from or what they look like. They will help each other out and show each other moves.

Wrestling creates a true brotherhood, and that’s what we need in this world… more brotherhood. People who are involved in a brotherhood don’t go shoot each other like some of the kids are doing out there these days… Wrestling and I are doing our part to further that brotherhood and develop some good men with the promise of a brighter, stronger future who don’t need to use violence to get what they want.

Hopefully, this weekend I can find some time to work the front-headlock moves with my boy, Dakota. I’ve noticed some of his opponents are leaning a lot in the neutral position in an attempt to protect their legs from being shot upon. Well, I guess we’ll just have to wait and see what the weekend brings…