I feel like my 14-year-old boy Dakota is already changing for the better, thanks to wrestling. When I showed him moves at home this week, he actually said, “Thanks.” Wow… is all I can think. I guess wrestling really is putting him on the path to be a good man someday. 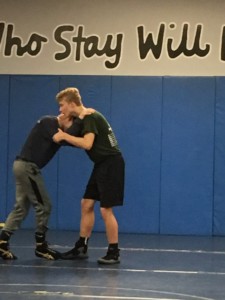 Early Tuesday evening on our way to practice I had a talk with Dakota about the importance of sucking it up. I stressed how crucial it is to suck it up especially when you’re tired and really don’t want to during our 45-minute car ride to John Knapp’s KT KIDZ Wrestling practice in Rocky Hill, Connecticut.

I shared with Dakota that during the 3rd period when we’re all the most tired we’ve ever been in our lives, is when the real men come out to play. I let him know that most guys are just trying to get through the third period. Some others, however, seem to flip that seize the day switch in their heads, instead. These kinds of guys go into the carpe diem mode that third period. They’re not even thinking about just surviving that 3rd period. Instead, all gears are firing, and they’re now thriving in their own element of toughness. This is where these champs and good men really pick up the pace to a point where it becomes punishing for their opponent to try to keep up.

I have actually seen this all-out pace done in the All-American rounds where a wrestler actually started crying because his opponent set such a punishing tempo in the last period of their match. It’s a killer instinct to win by making the other quit. And if you’re already winning, then it’s a killer instinct to pin your opponent, rather than just settling for winning the match on points.

Soon we arrived at practice where Coach Knapp and Coach West showed some defensive strategies to the double leg takedown. I was pretty happy about because Dakota was having some trouble stopping the double leg attacks of some of his better opponents the week before. The coaches explained that our first line of defense is our head position and hand position. They showed how to hip-in and bury your opponent’s head, push his hips back to extend and weaken him, and then showed a great way to grab your opponent’s ankle and slowly circle around to the back of him while driving him down to the mat with your own hipping-in pressure. I feel like this could be a good move for my son Dakota to help him defend the double leg attack because he has long legs and arms. Unlike me… I’m assuming he must have gotten that from his mother’s side of the family.

After practicing the moves for a while, we went into the live wrestling part of the night. I couldn’t wait to see what Dakota can do tonight now that he knows a little tiny bit more than he knew last week.

The first six-minute match he wrestled against a really good kid who schooled my son in the combat sport of wrestling. I’m slightly frustrated, and I feel bad for my boy. He looks a bit worn out after this match. Hopefully, the next match will be better…

The next match wasn’t any better, though. It might have been even more painful than the first one. I can feel the pain in my own shoulders as the 2nd boy is also schooling Dakota. This boy has a half-nelson in so deep that it looks like my boy’s shoulder is about to pop out. Dakota showed a lot of guts out there fighting it off, but this boy, just like the first one, was just too much for him at this point.

That night there were a few times I saw the frustration on Dakota’s face with him not being able to do anything against his opponents, coupled with the pure exhaustion from fighting off his back. There was a part of me that felt bad for my boy, but then there was another part of me that thought that the wrestling practice mat is a way better place than the real world for him to get a few early lessons in dealing with feelings of frustration and not being able to accomplish what he wants to.

On the way home that night, I told him that I was proud of how well he hung in there and didn’t quit when he felt overmatched, and everything seemed to be going wrong. I also told him that I would teach him how to build a base from the bottom and defend that half-nelson before next

practice. Then I asked him if he wanted to sleep on the way home, but he said, “No.” Hmm… that’s an improvement when compared to the last time he had to fight for his life out there on the mat.

Oh, yeah, I almost forgot to tell you this. On the positive side, Dakota was able to hit an arm-drag on both of his opponents who were a lot better than him, and he successfully took them both down to the mat. Pretty cool, huh?

Thursday night got off to a great start as I noticed Dakota’s slide-by move was looking a little bit better. The kid he was drilling with was doing a great job of helping Dakota better understand, and execute it. And occasionally Coach John Knapp intervened and re-coached some of the finer points of the move so Dakota could do it more effectively. At one point, Dakota even said to me, “I think I finally know what get your head out of the ay means now, dad.”

I’m beaming as we all move into the live wrestling part of practice. I’m thinking that after doing a little homework or work at home, Dakota should do a bit better tonight than he did on Tuesday night. Boy, was I wrong. The first six-minute match Dakota wrestled a kid that was really good who had his way with him. Dakota was clearly over-matched and fighting for his life out there again. However, a bright spot was that Dakota hit his arm-drag again and successfully took this older and more experienced boy down to the mat.

The next boy and six- minute match was a repeat of the first one. Another great older and more experienced wrestler who really schooled Dakota and bent the heck out of him. I didn’t like to see my boy being manhandled and bent all up like that. I wanted to help him. But, in the same breath, I also knew that he had to take his lumps out there all by his lonesome self. No one could take those lumps for him if he were going to improve. Dakota could get bent like crazy, and that would be okay as long as he didn’t break, and then learned from it.

Another bright spot of the night was that Dakota successfully hit another arm-drag on this kid, too, and took him down, as well. Dakota didn’t think much of it, but I certainly did as I did a fist-pump off on the side of the mat.

At the end of this match, I didn’t think Dakota would have any gas left in the tank, and I was glad practice was over. However, I was wrong, and it wasn’t over. Coach West yelled to find another opponent. Dakota wrestled a third six-minute match and two rounds of round-robin. I wondered where Dakota was finding the energy and will to fight on, but somehow he did. And I’m proud of him.

During this trying period of time of watching my exhausted boy trying to hang in there, I felt a tap on my shoulder and turned around to see who it was. It was Vinny Knapp, the father of Coach John Knapp. Mr. Knapp is the guy who always seemed to look out for me when I was just a kid. He was always picking me up and driving me to some wrestling practice or tournament somewhere so I could practice my fighting on the mat, instead of on the streets.

I am extremely grateful for all that Mr. Knapp did for me when I was growing up in East Hartford. And I was delighted to see him again and chat with him for a bit. Our conversation of catching up certainly made it easier for me to deal with the hardships that my boy was going throughout on the mat at that same exact moment.

Finally, practice was over. It was a very frustrating week. However, every coach in that wrestling room stopped Dakota before we left and told him he did well and that his tiny improvements are visible. Coach John Knapp instructed him to keep his head up because he’s getting nailed with half-nelsons left and right. I guess we’ll have to work on those half-nelsons again at home.

When we got in the car for the long ride home, I asked Dakota again if he wanted to sleep. And again he said, “No.” Again, I thought, “Wow.” Then he blew my mind with what he said next, which was, “Dad, they’re better than me because they have put in more time and work than me.”

“Dang” was all I could say. He’s really starting to get it. Effort applied over time… That’s the game-changer… And that’s the developer of champs and good men… Now we’re looking forward to next week.