As the next week of pre-season wrestling rolls around, Dakota tells me in the car on the way to practice that he isn’t feeling 100%. I wonder if his interest in wrestling is fading, or if he’s still feeling the effects of last week and those really tough kids he had to wrestle against on both nights…

However, once practice starts and I’m watching Dakota practice the wrestling moves that Coach Knapp and Coach West are showing, Dakota looks fine, so I’m no longer concerned and I kind of drift off a little bit to daydream about how I wish I knew these moves back in high school that now my freshman son is learning right now before the season even begins. These moves are firing up my imagination on what would have been possible if I knew back then what I know now.

Drilling and instruction go well. Now comes the live wrestling part of practice. I’m still feeling a little nervous as I remember what my son Dakota went through last week as he wrestled one tough kid after another.

Dakota gets partnered up with a kid that he looks slightly bigger than, but in wrestling that doesn’t mean much. The whistle blows for the six-minute match, and Dakota gets the first takedown. He then rides his opponent for most of the first period. Unfortunately, he doesn’t really know what to do to turn his opponent to his back successfully. Eventually, his opponent escapes and then Dakota takes him down again before times runs out. The next two periods goes well for Dakota, and I’m a bit relieved thinking how this match was good for Dakota because it will give him a chance to get some of his confidence back after the beatings he took last week.

The second practice match kid also appears slightly smaller than Dakota, but he looks athletic and wiry. I noticed this kid earlier in the night, and he’s a pretty good wrestler. Tangling with this kid should be good for Dakota now that he has a little bit of his confidence back.

The whistle blows and once again Dakota gets the first takedown. I’m impressed because I know this kid is pretty good. However, once on the mat, it becomes painfully apparent that this kid has a lot more experience than my son Dakota and he easily reverses him and then throws the leg in. Dakota doesn’t know what to do. He hasn’t been taught leg-wrestling yet. They roll around a lot, and Dakota misses a few opportunities like grabbing his opponent’s head when it’s hanging. He just doesn’t’ know yet what to do, and his opponent ends up pinning Dakota a few times while down there on the mat rolling around.

However, on the positive side, Dakota does seem to be a little bit better fighting off the half-nelsons tonight with at least these two kids. Also, every time Dakota was on his feet tonight he successfully took his opponents down to the mat. I think Dakota’s athleticism is really helping him a lot

On the ride home, Dakota feels pretty good even after doing some extra pull-ups on his own after practice. We talk about his matches, and he felt good about the first one but frustrated that he couldn’t do anything with the second kid. I remind him that he was only outmaneuvered on the mat, but he had dominated the neutral position. He seems surprised that he had had that much success. I was surprised that he didn’t realize that while his opponents were better on the mat tonight, he was better on his feet tonight…

During Thursday’s car ride over to Coach John Knapp’s KT KIDZ Wrestling place, Dakota surprising me again when he asked, “How do you score? How do you get a takedown?”

Wow was I was shocked! I had apparently forgotten how new he is in the sport of wrestling. He’s had some success, especially on his feet, so I guess I just naturally felt like he was a lot further along than he really is. Lesson learned… The humbling way… Boy do kids have a way of doing that to us adults, don’t they?

In practice, that night Coach John Knapp and Coach West show an excellent arm-bar series. One of the tilt moves looks to me like a variation of the old freestyle gut-wrench move. Again, I think, I wish I knew that move in high school. Well, to tell you the truth, I knew the high school folk-style arm-bar tilts, and I also knew the international freestyle gut-wrench; I just had never considered putting the two of them together to score on my opponent. Wow! Wrestling sure has advanced here in Connecticut since I had coached wrestling 14- long years ago. 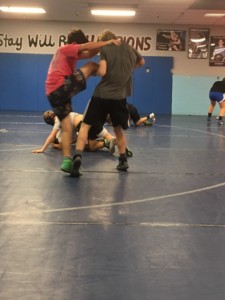 During the live wrestling portion of practice, Dakota gets paired up with a pretty good kid who he wrestled a few weeks ago. This kid had his way with Dakota back then. Tonight the whistle blows and Dakota gets the first takedown. Wow! He really is getting better on his feet! Later in the match, Dakota gets a beautiful double let where he lifts his opponent and throws him down for another takedown. I was very impressed and so was Coach John Knapp as he walked by and yelled, “Way to go, Dakota! You’re already 100 times better than your father was!” Johnny grins ear to ear and gives me a little head nod and wink.

My son Dakota certainly has improved, especially on his feet. Unfortunately, though, this second kid, too, had his way with Dakota on the mat pinning Dakota several times in the down position. Dang… I wish I had a small mat at home so I could work with Dakota in the down position. All of our work so far has been up on our feet in the neutral position, which looks like it’s starting to pay off.

Overall, Dakota and I are both happy with his performance tonight and his mental toughness. But again, he got hammered with those half-nelsons. Guess I have some more work to do with him. We also need to watch some wrestling videos soon so he can see how the scoring in wrestling works. And lastly, we better keep going to these KT KIDZ Wrestling practices. These practices are helping a lot in our quest for Dakota to have a fighting chance on his first official day of high school wrestling on the Monday after Thanksgiving. Hopefully, the regular season, too, will be another successful leg of our journey in building a state champion, or at least a good man someday out of my boy Dakota